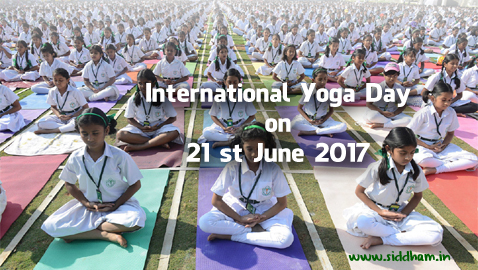 Prime Minister is participating with 74 UnionMinisters for the forthcoming International Yoga Day. The Ministry of Ayurveda, Yoga and Naturopathy, Unani, Siddha and Homoeopathy (AYUSH) has been putting great efforts to make the International Yoga Day functions across the country and world a grand success.

Prime Minister Narendra Modi in his UN address had suggested the date of 21 June, as it is the longest day of the year in the Northern Hemisphere and shares special significance in many parts of the world.

The celebration of the event International day of yoga is supported by various global leaders. It is celebrated by the people of more than 170 countries including USA, China, Canada, etc. It is celebrated on international level by organising the activities like yoga training campus, yoga competitions and so many activities to enhance the awareness about yoga benefits among common public all over the world. It is celebrated to let people know that regular yoga practice lead to the better mental, physical and intellectual health. It positively changes the lifestyle of the people and increase the level of well-being.

National Workshop on Safety & Efficacy of metallic preparations in Siddha