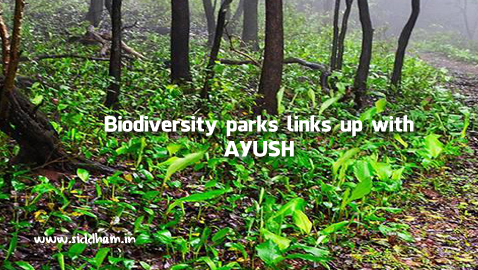 Delhi Development Authority (DDA) is likely to link with the Ministry of Ayurveda, Yoga, Unani, Siddha, & Homeopathy (AYUSH) so that medicinal herbs from the city’s biodiversity parks can be used as home remedies for common diseases.

The idea was raised after Lieutenant Governor Anil Baijal visited the Aravalli Biodiversity Park on Saturday and urged the authorities to work with the AYUSH ministry to promote use of medicinal plants as home remedies. “As desired by the L-G, we would soon initiate discussions with the ministry on how medicinal plants grown in the city’s biodiversity parks can be used for home remedies,” told a senior official of DDA.

More than one lakh people visit the two parks every year. Authorities are planning to tap this flow to reach out to the people with their medicinal plants. Medicinal plants are not only a major resource base for the traditional medicine and herbal industry but also provide livelihood and health security to a large segment of Indian population.

Estimates available with the ministry suggest that domestic trade of the AYUSH industry (Ayurveda, Yoga and Naturopathy, Unani, Siddha and Homoeopathy) is estimated to be about Rs 90 billion. The Indian medicinal plants and their products also account for exports in the range of Rs 10 billion.

Tips to get rid of Acne