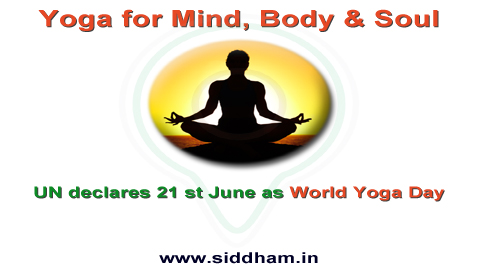 On Thursday 11th December 2014, UN declared 21st June as World Yoga Day. It is a proud moment for India to celebrate this day after the decision taken by UN assembly. Prime Minister Shri Naredra Modi during his visit to United Nations this September urged all the communities of the world to celebrate Indian Yoga at international level. In his speech at the UNGA, Modi had said, “Let us work towards adopting an International Yoga Day. Yoga is an invaluable gift of our ancient tradition. It is not about exercise but to discover the sense of oneness with yourself, the world and the nature.””Three months ago, Prime Minister Narendra Modi had appealed to the world community that India’s yoga should be celebrated as World Yoga Day. I am happy to inform you that we have received support of 170 nations and four days from today, the United Nations will declare June 21 as the World Yoga Day,” Sushma Swaraj had said last week. Shripad Naik is the minister for Yoga and traditional medicines in the NDA government.

Yoga is a 5000 year old Indian treasure of knowledge. Basic fitness in daily life is a common need of every one. Yoga can fulfill this need irrespective of the type of work one does, one’s role in life or the type of food one eats. However, this benefit may not be possible if one do not practice the correct technique of yoga or practice it irregularly. Yoga can help every one play his or her roles more efficiently, more smoothly and more comfortably. Two main advantages of Yoga are prevention of disorders and ailments and maintenance of health and fitness in daily life. Other advantages include flexible muscles, supple joints, relaxed and tension free mind and efficiently working vital organs such as the heart, lungs, endocrine glands, liver, pancreas and brain.

Yoga practitioner should fill only half of the stomach with solid food, a quarter with water and the remaining one fourth should be left empty. This is a golden rule that one needs to observe for every meal especially if one practices yoga regularly.

Yoga is spiritual,mental and physical practice or discipline that aims to transform body and mind. Practicing Yoga raises the capacity of the human mind to respond to higher vibrations and to perceive, catch and assimilate the infinite conscious movements going on around us in the Universe.

There are four types :

According to Thirumoolar 3000,the verses for Ashtanga Yoga is as follows:

The Eight limbs of Attanga Yoga

Method of practice of Pranayama

Withdrawing the mind from objects of enjoyment. The practice of both posture and breathing exercise leads to a progressive desensitization that shuts out external stimuli. When consciousness is effectively sealed off from the environment, this is the state of sensory inhibition.

Concentration is the holding of the mind in a motionless state. “Dharana”, which originate from the verbal root ‘dhri’ means’ to hold’, what is being held is one’s attention which is fixed on an internalized object. Dharana is an important step from the medical point of view since the Yogi can see how the prana or energy flows in the body and how it encounters different chakras (plexus of nerves) etc.

Meditation has proved to be an important technique of modern form of Yoga especially suitable for the solution of problems peculiar to modern times. When meditation is combined with other techniques of yoga, its effect is greatly enhanced for treatment of a wide range of health problems or disorders. The act of thinking deeply about something. Meditation is a method by which a person concentrates more and more upon less and less. The aim is to empty the mind while paradoxically remain alert. Meditation is a state of concentration of mind on one single object so that the same experience arises continuously in the mind again and again without there being any other experience that may intervene. From deep meditation, one can attain Samadhi.

Samathi is the state of super consciousness that lead ultimately to self- knowledge (Atmagnanam), Samadhi is union with the Lord. The state of Samadhi is beyond description. It is beyond the reach of mind and speech. One has to feel this him self. Just as salt becomes identical with water through union, so the identity of mind and self is named “Ecstasy”. When the mind and the life force merge and dissolve, the balance is named as Ecstasy.

Though many think of yoga only as a physical exercise where people twist, turn, stretch, and breathe in the most complex ways, these are actually the most superficial aspect of this blissful science of unfolding the infinite potentials of the human mind and soul.

Think Before your drink Soda beverages