One of the 18 eminent Siddhars who wrote various poems that depicts spiritual essence. One of his famous works “Aadu Pambe” has a very deep inner meaning. In the poem, the nobility and sublimity of the cobra represents the power of kundilini. On being spiritually guided by his Guru Sattaimuni, he could change the five elements into a five headed cobra. He is also enlightened with Astamasiddhi or Eight Supernatural powers. He attained Samadhi in Sankaranvoil (Tirunelveli district). In the western road side of temple, the samadhi of Pambatti Siddhar is located.

This temple is a fusion of two faiths – Saivism and Vaishnavism. This is one of the big temples of Tirunelveli and one of important shrines of Lord Shiva. Main deities are Lord Shiva and Parvathy in name of Gomathi Amman. There is another deity in between two that is Sankara Narayanan which is fusion of Siva and Vishnu. It is believed that on request of Parvathy Devi, Lord Shiva appeared as Sankaran Narayan revealing one side as Hari(Lord Vishnu) and other side Haran( Lord Shiva). To emphasise oneness of Hariharan, the ideology the deity SankaraNarayan depicts Shiva on its right and Vishnu on the left.

Beliefs, Rituals of the temple

It is believed that Gomathi amman or Parvathi Devi keeps the place free from venomous creatures and praying her can eliminate fear of poisonous beings. Pambatti Siddhar worshipped Goddess and attained Samadhi which is seen at the back of the temple. The general belief is that the Holy Sand “Puttrumann” (Puttru = Ant Hill, Mann = Sand) that one gets from this temple is capable of curing all the diseases. 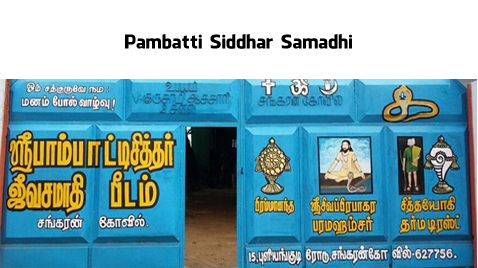 Miniatures of snakes and scorpions made of metal and other elements are sold inside and around the temple premises. It is believed that offering these miniatures inside the temple hundial can get free from Sarpa dosham (curse of snakes) and other curses effecting their family life and professional life.

Indian Independence Day: “A Tribute to the Divine Souls”

Agastyarkoodam – The Land of Medicinal Plants