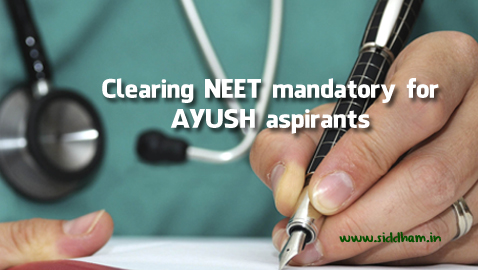 The decision was taken to standardise the admission procedure and attract meritorious students into the AYUSH (ayurveda, yoga and naturopathy, unani, siddha and homoeopathy) stream. From next year, it will be must for those seeking admission in AYUSH courses to clear the National Eligibility-cum-Entrance Test (NEET). The Centre had last year announced that admissions into AYUSH courses would be through the NEET, but could not implement it from this year after states raised objections to it.

“The demand for ayurveda, homoeopathy, naturopathy and unani medicines and yoga have increased worldwide and the number of students pursuing such courses have also risen. So there is a need to maintain standard of education in this stream,” Minister of State for AYUSH Shripad Yesso Naik said today.
With the introduction of NEET, examinations by privates entities would not be conducted to fill seats in any of the AYUSH colleges, he added.

UP Govt to start AYUSH wellness centres in all districts soon

Herbal show to spread the benefits of Traditional medicine